I’m entering day three of my week-long writing retreat, the longest I've been away from home since my son was born four years ago. The deep pleasure of waking slowly each morning to silence has not dissipated. Nor has the bliss of falling back asleep for an extra hour, then coming down the stairs from the loft to make coffee, and going straight to the desk to journal. I used to do this every morning when I was childless: write, first thing. For almost twenty years, I cultivated a morning writing practice as my most beloved and sustainable ritual. Now, my morning begins with my son crawling on top of me at 6:30 and admonishing me to get up, and it’s rare that I manage to journal once a week. Other tasks and the never-ending job of motherhood always manage to claim precedence over “mere free-writing,” or, in other words, writing with no aim but to be present with my mind and heart.

Yet now I sit writing in a lovely cabin at Hypatia-in-the-Woods, one of the few writing residencies left for women in the United States. I’m looking out upon tall cedars and moss-covered alders, and beyond a glimpse of the bay, breathing in the awareness that I will be here, alone, for an entire week. And I won’t just have the first few hours of the day to myself, but the rest of the day, and the evening as well. I can allow myself to drift from free-writing to reading to making a simple meal for one, to taking a shower, going back to my journal, then more reading, lunch, a walk in the woods, and more writing . . . all in a day! 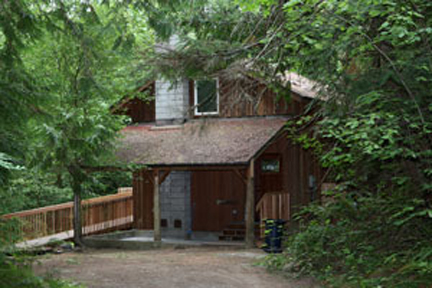 Open receptivity. That’s what I’m practicing this week. Not just writing, but remembering how to let myself sink into spaciousness, unhurriedness. After four years of constantly being “on,” in service to the life of another being—and frantically squeezing in whatever writing-related work I can in between—I need to remind myself that it’s okay to not be productive 24-7. That it’s okay to just read and stare out the window for a couple hours, to free-write, breathe, and dream. Every writer needs this. Every person needs this. Time to restore, be kind to one’s self, and to empty out in order to let in new ideas, perspective, and waves of deepening gratitude.

I've been listening to old music while I've been here, music that used to accompany and comfort me daily, and that became a soundtrack to my life. Nowadays, it’s rare that I put on my own music, for my time at home is already so full of noise and distractions. But back before I got married and gave birth to my son, I spent years of my life more or less alone, wandering around the world. Once upon a time I could do just fine traveling for months on end with one change of clothes and a few necessities in my pack. I took pride in how frugal I could be—whether it was backpacking through China for six months on $1,000, always shopping second-hand, or house-sitting for months at a time—and, in turn, being able to go long stretches without working. Working for other people, that is. For I have long seen writing as my true work.

After I returned to the United States from my first trip to China in my early twenties, I realized that what I wanted more than anything was to write. Soon, I transferred colleges and enrolled in writing classes, filling a spiral notebook a month. I began to practice calling myself a writer, even though others might raise their eyebrows at such a claim. Still in large part supported by my parents, my days were spent in a dreamy state of introspection, alternating between studying, tutoring, writing, taking long walks through the forest, and practicing tai chi down on the gravelly shores of the Puget Sound. I was also fueled by Buddhism and spent much of my time alone, lamenting my great loneliness while simultaneously learning how to be okay in my solitude.

Upon graduation, I went back to live in China, the birthplace of my mother. But the suffocating crowds and pollution, along with the mounting workload of teaching five college composition classes, quickly overwhelmed me. I quit that job but remained in China for nearly another three years, writing, teaching, and living with my new boyfriend, a Chinese painter. Every day I wrote while he painted. We supported each other’s dedication to our art.

Eventually, I left China and returned to the Pacific Northwest. As I flitted from home to home and job to job, trying to figure out my next step, writing remained my constant. Finally, I moved into a rustic cabin on 50 acres of land with the man who would become my husband. He offered me the corner nook under a skylight as my writing space. With a gift of some money from an old friend, I could once again spend my days alone—writing, reading, and immersed in nature, content in the knowledge that I was right where I needed to be.

Despite the fact that so few people had actually read my work, I clung to my truth: writing was my calling and my practice. I knew that if I had the choice to do anything in the world, I would write. So far I’d been blessed with the ability to make this a reality, but I still felt I had so much to prove. Inside, I worried that if these wide swaths of time to write were taken away from me, I would not be able to tap into my contemplative heart in the same way. And I grew dependent on the idea that I needed several hours, or even better, a whole day, uninterrupted, in order to properly sink into a new piece. I feared that I’d only been such a dedicated and prolific writer thus far because of my privilege, and that my core was actually weak.

When I became a mother four years ago, I knew that my writing life would suffer. I suspected it might even be several years before I could build it back up again. But how would this translate on a tangible level? Would I be able to do anything besides the occasional journaling? Could I string enough coherent thoughts together to form an essay?

Now, as I read back over the rambling blog posts I spat out in those first years, I am reminded of how desperate I was to be writing more often, and how whatever little I did accomplish felt like the bare minimum to keep my old identity alive. And if I couldn't be writing, then I wanted, at the very least, to be more acknowledged by my husband and society at large for the endless domestic chores I engaged in each day, and the invaluable, yet exhausting, attentive care that I gave my child at home. Our son was also a terrible sleeper and woke often throughout the night for his first three years, and, as a result, I became a light sleeper myself, suffering from bouts of insomnia. For most of those first couple years, I was in some form of survival mode: get through the day, feed myself and my child, try to get some exercise. Forget trying to work on the two manuscripts I’d put on hold, sending pieces out for publication, or teaching workshops; I had to be realistic with my goals or else my own disappointment would be unbearable.

Those first years of motherhood were rough, but I also know now that they ultimately strengthened my faith in myself as a writer. Becoming a mother revitalized my devotion, forcing me to become more adept at grabbing whatever small windows of opportunity emerged. And the isolation of being a stay-at-home mom fed my hunger to communicate with other adults, pushing me to break through my fear in sharing my work. At first, I mostly just wrote for my blog, where posting every couple weeks helped me to let go of my perfectionist editor tendencies. Then, when my child turned two and sleep improved a little, I returned to teaching and to one of my manuscripts, working with a new sense of urgency. My relief that I had not abandoned my commitment to writing after becoming a mother was huge.

If anything, I’m more focused now and determined to stake out my time. I also know that I can be one of those people who writes in the only one-hour block she can find, if that’s all she has. Although I still only have ten hours a week, on average, to myself, I have gradually found the space to create new work, edit and submit older work, and teach a workshop now and then. I set my own deadlines and do my best to uphold them, even if I know that I must stay open to unexpected demands: a sick child, a lack of childcare, or simply utter exhaustion. When this happens, I remember to be kind with myself, and to trust that I will keep coming back to the work when I can. I no longer have time to experience existential bouts of melancholy over “what I’m doing with my life” or to wonder whether my call to be a writer is meaningful, versus some form of narcissism or escapism. I just know I have to do it.

Now that I've tasted what it felt like to not be able to write much for several years, I trust more than ever in how writing belongs to me, how essential it is, like breathing. All of my goals of outward success are still important, perhaps more so than before. And yet I also know that it is the rhythm and relationship of continually returning to the page, and the process of sitting down to greet my mind, heart, and the unknown, that has sustained me.

Today, I sit alone in a cabin in a forest, grateful to remember what it feels like to be quiet and still. I’m reminded again of how much I need solitude and silence: time without the Internet to distract, time without children and the prioritizing of others, and time without a never-ending list of to-dos. Slowly, the chatter in my head begins to dissolve as I listen and wait for what comes next.

Anne Liu Kellor is a Seattle-based writer and a Hedgebrook alum whose essays have appeared in publications such as the anthology Waking Up American: Coming of Age Biculturally, The Los Angeles Review, Raven Chronicles, Blue Lyra Review, Duende, Vela, and on her blog: www.heartradical.blogspot.com. Anne’s unpublished memoir, Searching for the Heart Radical, follows her quest for language, love, and belonging, as she migrates between China and America during her twenties.


Comments
I needed to read this today. Thank you. As I type this with one hand, my six-month-old son (also a terrible sleeper) naps on the shelf of my arm. My laptop sits somewhere, dusty. And every day I don't write I worry that I'm losing something. I love that you've found a way to work in stolen moments. And it gives me hope.
Posted by Anna on Oct 24, 2014

Thanks, Anna. It is hard, but I've found you gain back more time as each year goes by. Requires a lot of patience... Bad weeks, good weeks. Many disappointments, many small redeeming successes. Some weeks now I still grapple for energy and time to work. But then I remind myself how far I've come. All we can do is hold strong to our love of writing and know that we will come back to it eventually when we can!
Posted by Anne Liu Kellor on Nov 5, 2014